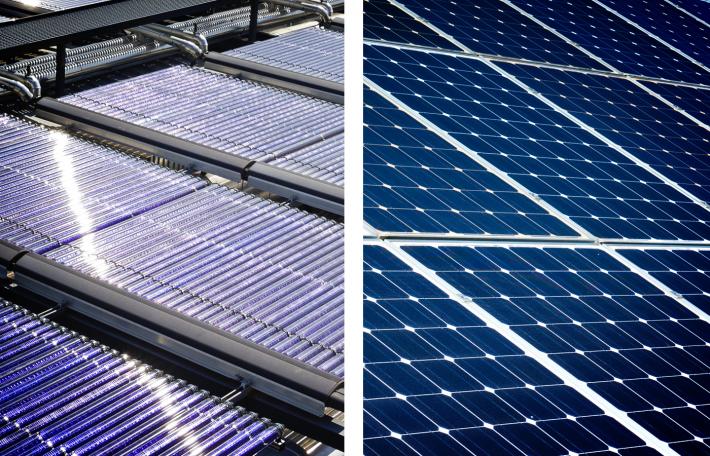 What Are the Different Solar Technologies For The Home?

What Is Solar PV?

Solar PV is one of the most common solar technologies. Generating electricity from solar panels comes from a method called photovoltaics. The effect occurs when voltage is created in a material when that material is exposed to the photons in light. The photovoltaic effect is the physical process of converting sunlight into energy. There are two forms of solar photovoltaic systems – crystalline silicon panels, and the less common thin film strips. Solar PV technology was born in the U.S. in 1954, when Daryl Chapin, Calvin Fuller and Gerald Pearson developed the silicon photovoltaic cell at Bell Labs. This was the first solar PV energy cell which could convert enough of the sun’s energy into power to run everyday electrical equipment. Solar technologies only took off from there, and lead to the solar PV panels we use today.

PV is a solar technology used in a variety of situations all the way from megawatt sized utility-scale solar projects to a small solar powered generator.

Thin film solar panels are a solar technology that fall under the category of solar PV. A thin film solar cell is created by depositing one or more thin layers of a photovoltaic material on a substrate. Cadmium telluride is the most common material used in thin film panels. Thin film cells typically have a lower efficiency than crystalline silicon cells. While they are cheaper than crystalline silicon solar panels, their inefficiency makes them a poor investment.

Monocrystalline solar PV panels are made by cutting the four sides off of cylindrical silicon ingots to make silicon wafers. The Czochralski process, which is the method used to produce the single-crystal silicon, is used to make monocrystalline panels. These panels have a consistent color and rounded edges.

Polycrystalline solar PV panels are made out of mutli-crystal silicon, so the Czochralski process isn’t used to make them. Instead, raw silicon is melted and poured into a square mold, which is then cooled and cut into perfectly square wafers. These panels have a speckled blue color and can be distinguished from monocrystalline panels because they don’t have rounded edges.

How Does Solar Hot Water Work?

Solar water heating is a solar technology that differs from solar PV because it doesn’t involve electrical energy, but instead uses energy generated by solar thermal or heat energy. Solar water heating works when the sun heats water in a solar thermal system. Solar hot water systems are one of the most popular solar technologies in countries like Israel, where all new residential buildings are required to install them. But this solar technology isn’t nearly as widespread here in the U.S. for use heating water inside homes and businesses. However, this technology is commonly used in the U.S. to heat swimming pools.

What Is Solar Thermal?

Thermal systems are solar technologies which use the sun to heat a substance for various uses. Arguably the most important part of a solar thermal energy system is the collector. The collector is what captures heat by absorbing sunlight. Depending on the collector type, a low, medium or high temperature can be achieved.

A really common use of solar thermal energy here in the U.S. is solar water heating for swimming pools. Here in San Diego County, it’s common for homeowners to get water heating systems installed for creating solar hot water for their pools. Solar hot water uses either a flat collector or evacuated tubes to heat water. The collector acts as an oven and warms water as the water passes through.

Another use of thermal solar is in power plants. Currently, the largest solar thermal plant is the Ivanpah plant in the Mojave Desert. The plant is comprised of fields of mirrors, called heliostats, which reflect the sun’s light towards a receiver. The receiver is filled with water that sits atop a tower. When the water inside the receiver is heated from the reflected sunlight, it creates a high-temperature steam that then powers a turbine.