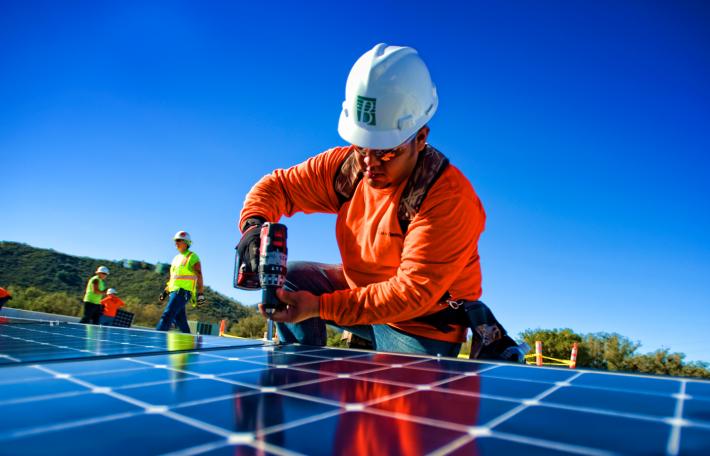 Baker Electric Solar is a forward-thinking company and is always seeking out new ways to meet the needs of customers. Recently, we installed a solar tracker for a customer. The tracker produces more solar energy than a traditional ground mount.

While we’ve been involved in utility-scale solar tracking systems, this was our first tracker installed for a homeowner. The tracker, Wovn Energy’s SolarTrackr DUO, can tilt and rotate on a dual-axis base so that it can point the housed solar panels towards the sun all day. As part of Wovn’s Hi-Yield Solar Initiative (HYSI), the SolarTrackr DUO increases efficiency, reliability and energy independence for its owner.

Most of the time solar panels should face the sun. But sometimes it’s windy, sometimes it’s cloudy. Sometimes your solar panels need a bath. We don’t know when that will be, so we designed a solar system that figures that out on its own, Co-founder and CEO of Wovn Energy, Greg Robinson said. The new SolarTrackr DUO is an internet connected device that continuously learns how to turn more sunshine into usable electricity.

The tracker’s owners, North County San Diego residents Steve and Wendy Rogers, contacted Baker Electric Solar and stated that their goal was to produce as much solar energy as possible with the least amount of equipment. They specifically requested a solar tracker system be installed.

One of ourSolar Energy Consultants, Sinuhe,designed a 8.1 kW solar system for the Rogers. The Rogers automated ground mounted system holds 30 LG 270 solar panels and uses one, made in America, SMA Sunny Boy 7000-US inverter.According to Wovn, the tracker system is 40 percent more efficient than a traditional ground mounted solar system.

The Hi-Yield Solar internet-connected solar system has the ability to orient its solar panels in the directions that deliver the highest economic yield to the system owner, the utility and other utility customers. At night or during high wind storms, the tracker will lay the panels flat.

With annual, seasonal and even daily variable weather conditions, there is no such thing as a perfectly optimized fixed solar panel system, said Baker Electric Solar President Mike Teresso. With this innovative solar tracking system, our customers benefit because their solar panels face the best direction for energy production at all times. Baker Electric Solar is committed to staying on top of industry advancesand the SolarTrackr DUO is a key one.

During the tracker’s installation, the Baker team and Wovn team worked closely together to ensure proper fabrication of the tracker.

We were excited to work with Baker from the day we got the call, said Wovn CEO Greg Robinson. It is rare to find a forward-thinking group of people like the team at Baker Electric Solar, who can exceed expectations in every facet of their business. When you get to be part of that team, it’s an honor.

While a solar tracker isn’t for everyone, it certainly is an impressive piece of equipment. If you’re interesting in going solar the Baker Way, call or click today!