Net Energy Metering What in the World Is That 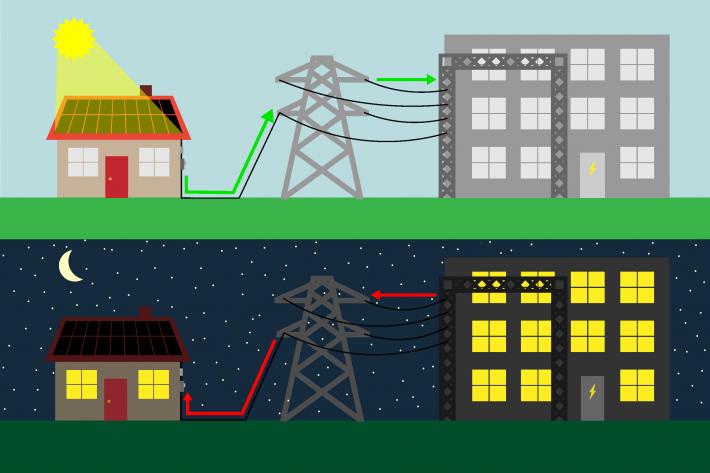 Sometimes it feels like there’s this whole alphabet soup of solar energy terms. You’ve probably heard some of them thrown around. ITC, TOU, NEM – the list goes on. But what do they even mean? In this blog we’re going to focus on NEM (AKA net energy metering) specifically. It’s our hope that by the end of this article you’ll walk away with a better understanding of what net energy metering actually is and how it works.

Back to Basics – NEM: A Crash Course

Net energy metering is the billing mechanism used by utilities for solar customers. When electricity is created it must be used or it goes to waste. When your solar system produces more electricity than you’re using in the moment, it goes to the utility grid to be used by someone else. When this happens, the utility gives you “credit” for all of the excess electricity you’ve generated.
Your system produces energy during the daylight hours, so this is likely when you’ll have excess energy that’s later credited back to you when you need it at a different time (such as at night when the sun isn’t out). Your system will also likely generate more electricity in the spring and summer months when there are more hours of sun in a day.
The “credits” you receive back from the utility roll over from month-to-month, so you can use the credits you received in the sunnier months during the fall and winter. All of this can be tracked with your home energy monitor that comes with your solar system.
Solar customers get an electric statement every month that details production and usage. The utility charges all solar customers a monthly fee for connection and grid infrastructure maintenance. However, you don’t pay for any electricity until the 12-month anniversary of your solar system going live.

Okay, that’s all fine and good. But what does it look like in real time?
Let’s say Bob and Mary have a 7kW (kilowatt) solar system. From 10 am to 2 pm Monday through Friday, nobody is home. Aside from a few clocks keeping the time, there is basically no electricity being used in the house. However, the power plant on their roof is hard at work, producing massive amounts of energy. Thanks to net energy metering, Bob and Mary’s excess solar electricity has somewhere to go. The utility buys this electricity from them in the form of a credit. These credits are then used by Bob and Mary when they get home later in the day and begin using electricity around their house. The sun has gone down at this point, so their solar system is no longer producing energy, but thanks to their solar credits, they’re still benefitting from the power their system produced during the day.
Let’s say they break even on their credits that day. They used exactly as much energy as they produced. Maybe by the end of the month, they’ve used a couple more kilowatts of energy than they’ve produced, they might end up with a $12 electric bill at the end of the month. Let’s say this is January, when their system isn’t producing as much electricity as it does in the summer months because of how many hours of sunlight there is in each day. By June, maybe their bill is -$12. Their solar system produced more electricity than their home used in the month, so SDG&E owes them credits. Keep in mind, when you have solar you only pay your electric bill to your utility once a year. By the end of the year, the energy Bob and Mary’s solar system produced in June has covered the cost of the electricity they used in January thanks to net energy metering.

For more information about how Net Metering works, watch the video below: