Solar, Bitcoin and the Blockchain 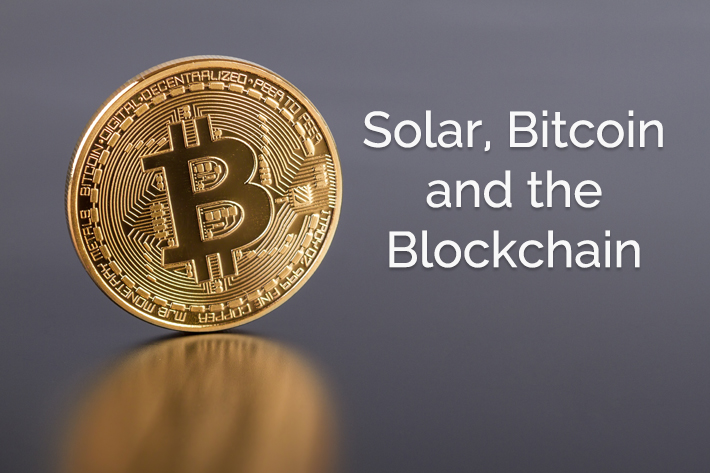 It's going to happen fast.

A new concept is sweeping the internet that will fundamentally improve the trust, speed, and accuracy of all digital transactions within a few short years. It is based on leveraging communities of computers all working together, using the power of group consensus to make decisions without a central authority. Why is Baker Electric Home Energy interested? Blockchain will fundamentally change how the energy industry operates and Baker intends on being at the forefront of this exciting new technology.

So what is blockchain technology anyway?

Blockchain has been revealed to the world recently as the technology behind Bitcoin. The financial world is buzzing with talk of Bitcoin. How are people becoming Bitcoin millionaires? Should you invest? Is there a bubble? How will it be regulated? And so on. But what they fail to recognize is blockchain technology itself is the bigger story. Blockchain allows billions of dollars a day to move in and out of Bitcoin without the need for direct human intervention or a master record keeper. Blockchain is a way of maintaining the integrity of information by distributing it among a network of hundreds or thousands of computers. There is truth in numbers. For example, a thousand people collectively telling the same story is more trustworthy than an individual. Or think of it like this, you are running a business where it is critical that financial accounting is accurate down to the penny. You could hire one accountant and trust their work to be error-free. Or you could increase the probability of accuracy by hiring two accountants to work independently and compare their results. Hiring a third accountant would almost guarantee accuracy. How about hiring thousands? That’s blockchain.

The blockchain can keep accurate records of anything digital or digital representations of things in the physical world. Perhaps most disruptive, however, is the blockchain can hold executable instructions – or ‘smart contracts’. Smart contracts eliminate the need for third-parties or middle-men to execute the terms of a contract. You might want to look away for this next example if you are a lawyer. Two driverless electric taxis get in an accident. The data logs from both cars are instantaneously uploaded to a community of computers whose job it is to determine fault and cost of repairs. They collectively agree Car #1 is at fault due to a sensor malfunction. A smart contract executes in which funds from Car #1’s insurance company transfer to Car #2’s bank account. The entire process takes less than a second.

The barriers have been purely psychological.

There has been no sudden advancement in technology that has led to the upcoming blockchain revolution. The barriers have been purely psychological. The concept of computers having the final say in moving valuable things in and out of your possession is a bit terrifying. But consider this – every bill you have set to autopay each month is technically a smart contract. Much of your retirement portfolio is traded not by humans, but computers running algorithms. Blockchain simply spreads the decision-making process across multiple computers for improved trust, accuracy and speed.

How exactly will this change the energy industry? From the consumer’s standpoint, it won’t appear to change much at all. Don't count on being able to wake up anytime soon to pay your electricity bill in Bitcoins. The changes will all be behind the scenes. The energy industry operates on layer upon layer of contracts. An electron generated at some faraway solar farm might change ownership several times before reaching your fancy new smart-home dimmer switch. It might be stored, borrowed, lost or stolen along the way as well. All of these scenarios require a complex maze of contracts. All of these contracts will be executed quickly and accurately using blockchain. This will translate into massive cost savings for all parties involved. Except for the consumer, of course, who will always get charged as much as their utility can legally get away with.

This will translate into massive cost savings for all parties involved.

The concept of Bitcoin or any other cryptocurrency coin will play almost no role in the energy industry blockchain. There will not be some sort of energy Bitcoin the various players will be trading back and forth. Blockchain technology does not require a cryptocurrency coin, it is happy to trade in any currency or asset you tell it to. You will hear about various energy coin offerings over the next few years, but this is nothing more than fundraising. A company developing blockchain technology can invent their own cryptocurrency coin and sell it the way another company would sell shares. For example, the company might invent 1 million Acme Energy Coins out of thin air and sell them in an Initial Coin Offering (ICO) event to raise a few hundred thousand dollars. If they need more money, they can invent another million coins and sell them too. The people buying the coins may have no idea there is no connection between these coins and the blockchain technology the company is developing. These companies are not trying to be deceptive, this is fundraising 2.0 in the new digital world. It does, however, leave some unanswered questions about the value of the coins after they are no longer needed for fundraising purposes.

The intensity of the blockchain hype will increase over the next couple years, then quickly die down as people grow more accustomed to it. It will be the technology behind everything from voting to holding the life savings of a farmer in Africa. For now, just enjoy watching it unfold. Watch as industry after industry adopts blockchain. Watch as others resist because it removes their ability to cheat and manipulate. Overall, the world will be a better place with the adoption of blockchain.

Baker Electric Home Energy is watching blockchain technology closely to find ways it will improve the lives of its customers. It is not outside the realm of possibility that someday Baker’s thousands and thousands of solar customers across Southern California form an aggregation of clean power producers. This massive collection of generation would exceed the size of many utility-scale power plants and allow Baker’s customers to leverage financial returns beyond Net Metering. Blockchain technology and smart contracts could be used to automate the entire process. Can you imagine a day when your solar system not only powers your house but is part of a larger system that changes California’s renewable energy future? We can.

What is the internet of energy?