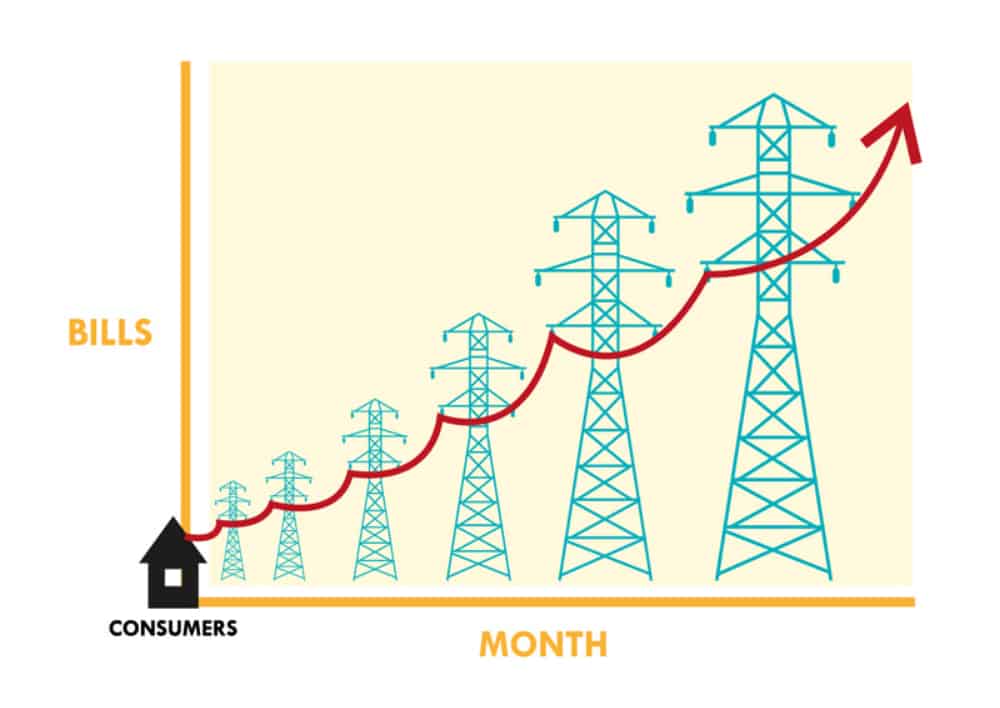 Why California’s High Electricity Prices Will Continue to Rise

Avoiding California’s historic electric rate increases is hard, but possible with the installation of a home renewable system from a trusted industry expert.

Even though the program officially closed in 2016, the California Solar Initiative produced several surviving subprograms in support of the state’s wider solar efforts that began in 2006. A cornerstone of this effort was the Million Solar Roof Initiative that promised lower renewable energy prices for residents who opted for solar roof installations.

California’s successful solar programs continue to lead the US in generation, even though consumer electricity costs continue to rise. In fact, California’s historic electric rates are predicted to continue this upward trajectory for the foreseeable future. Understanding why this is the case and what it means for your home renewable energy system requires some exploration of electric cost factors and how utility rates are calculated.

California’s long history of high electricity prices has made easing this burden into an ongoing challenge. Continued high rates coupled with concern about climate change prompted the state to adopt long-term programs to increase renewable energy generation. Despite a significant growth in renewables, particularly solar energy, achieving parity between electric rate increases and revenue increases has been difficult to maintain for Investor-Owned Utilities (IOUs).

Data from the Public Advocates Office.

Since 2016, the disparity between residential rates and utility revenue increases has continued to widen. Multiple variables contribute to this gap, just as many factors influence higher electric bills. For example, your house’s size, location, and electricity usage all influence your utility rate. However, more complex drivers like global oil prices and trade relationships can also affect your energy bill, not to mention various government policies that significantly impact California’s electric rate trends.

California residents who have installed a renewable energy system can take advantage of net energy metering, or NEM. This billing mechanism allows consumers to store the excess solar energy they generate for later use, or to sell back to the utility company. Although mandated statewide, NEM rates vary by location, utility, and the date of your registered system installation. Currently, two billing guidelines exist:

For many Californians, these programs have undoubtedly factored into the decision to install a home renewable energy system. And many homeowners have employed them to break the cycle of California’s historic electric rate increases, at least for their households.

As of February 2022, Net Metering 3.0 was postponed indefinitely. The proposal, which had been slated to go into effect mid-year, would drastically reduce the amount utility companies pay for excess solar power from homeowners with renewable systems. If it passes, all homeowners not previously registered would be subject to the following provisions:

As the list above illustrates, NEM 3.0 would usher in some significant changes. Many in the state’s energy industry predict these changes will negatively impact the rate of solar generation growth and ‌California’s high electricity prices will continue to rise.

Residents can still take action to mitigate their individual electric bills. One that virtually everyone can adopt is the regular monitoring of online energy accounts.

Other options include the following:

Taking any or all of these actions will help lower your energy usage, and therefore your bill. The best way to significantly reduce your electricity bill is to install your own renewable energy system with battery backup.

Now, the possible re-introduction of NEM 3.0 makes having a battery backup more important than ever, so you can take advantage of current solar benefits. You will need to work with an industry expert to strategically select the system size and rate plan that optimizes any credits you receive from your utility for unused generation.

Baker Electric Home Energy has served the Southern California area for over 15 years and provided clean energy solutions to more than 17,000 of your neighbors. Our way of doing business, The Baker Way®, which includes delivering extraordinary service and building customer confidence, is exemplified by being awarded the Torch Award for 2021. For more information on how to significantly lower your California average electric bill, contact us.

Home Why California’s High Electricity Prices Will Continue to Rise