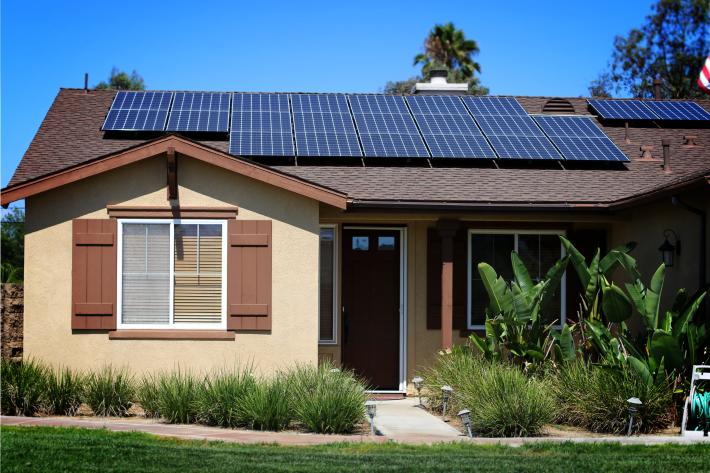 If you’re shopping for solar in San Diego, you’ve probably heard the word inverter. Or maybe you heard the word micro inverter. If your solar company didn’t explain to you what these items are, fear not, you’re in the right place.

I’ll break down the function of string inverters, mirco inverters, and power optimizers. If you didn’t read my post on solar and shade, you should do that after reading this as these three technologies all relate to shade.

Before I get into it, though, I just want to be clear that Baker Electric Solar uses all of the following technologies in our solar installations. I’m not trying to say that one technology is better than the other, in fact, I think all the technologies listed are great and serve a unique purpose. Our Solar Energy Consultants are really good at their jobs and use all available technologies to design the perfect custom solar energy solution for every customer – and that solution will be based on required power output and the best possible price.

Solar panels create electricity in the form of Direct Current (DC) the moment the solar cells are in sunlight. Homes utilize Alternating Current (AC) and so, power created by solar panels must be changed. This is where inverters come in. Inverters change DC to AC.

String inverters vary in size and capabilities and are usually mounted near a home’s electrical panel.Depending on the size of the solar system, any number of inverters may be needed, but in most cases 1-2 inverters are used.

String inverters are called such because when used, a solar array is essentially broken up into small subgroups – not physically, but rather by their output – called strings. Inverters treat an entire string as one massive panel. Because of this, it’s important that shade not be allowed to affect a solar system when string inverters are used. If one panel is covered in shade, it’s diminished output will be reflected in the entire string.

For example, if one panel in a string is partially shaded and its output drops dramatically (say 20%), then the entire string’s output is diminished by 20% – even if the other panels are not shaded.

This is where mircoinverters and power optimizers come in – more on them in a bit. First, we’ll look at a special string inverter that helps mitigate the effects of shade.

The Sunny Boy TL series inverter has multiple Maximum Power Point Trackers and OptiTrac Global Peak to mitigate the effect of shade.SMAs proprietary shade management technology ensures that areas of shade on your roof have a minimal impact on your systems performance, and allows the SMA Sunny Boy TL inverter to serve as a potential option over microinverters or power optimizers.

Now that you understand how DC from the solar panels needs to be converted to AC for your home to use, think about that process happening on a panel level rather than all together at a string inverter.

Micro inverters are small inverters mounted to the racking behind every solar panel in an array. Because they are able to invert the electricity on a per module basis, they are useful on arrays that are certain to be affected by shade since one panel’s output doesn’t affect the output of adjacent panels (no strings).

A power optimizer with string inverter setup still requires all the wiring and trunking of the panels for stringing.

If after reading this you are still confused on what to use for you solar installation, don’t worry, we’ve got you’ve covered! This is just one aspect of a solar array that our Solar Energy Consultants consider when designing systems. Some solar companies will push micros, others will push optimizers. At Baker, we have every solar technology at our disposal and our team of experts designs custom solar solutions for every customer.

If you’re considering making the switch to solar, look no further. Give us a call or click here to start the process. We’ve been in San Diego for over 78 years! Our team of experts won’t try to sell you solar, they’ll inform you of your options and empower you to make a choice.