The Surprising History of Solar Energy 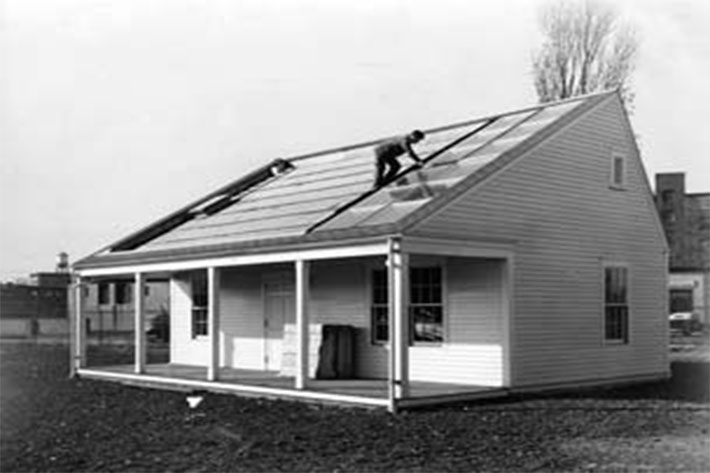 The huge growth of the solar industry in recent years might lead some to believe solar technology is a relatively new invention – when, in fact, it’s been around for a while. Join me as we go back in time to glimpse into the surprising history of solar energy to see how people have used the sun for power through the ages.

Humans began using the sun as a source of energy as early as the 7th century BCE with magnifying glasses to start fires by the sun’s rays.

In 1767, the world’s first solar energy collector was invented by the Swiss scientist Horace de Saussure, which was basically a “solar oven” that could be used to cook food.

French scientist Edmond Becquerel discovered the photovoltaic effect in 1839, which is the physical process of converting sunlight into energy. He made this discovery when he was only 19 years old while experimenting with an electrolytic cell made up of two metal electrodes placed in an electricity-conducting solution. He found electricity generation increased with the addition of light.

The next advancement in solar energy technology came in the 1860s. This is when French mathematician Augustin Mouchot first proposed the idea of powering steam engines with the sun. He and his assistant, Abel Pifre, made the first solar-powered steam engines in the following two decades. Mouchot was a true pioneer in solar energy technology. In 1880, he had the foresight to say “eventually industry will no longer find in Europe the resources to satisfy its prodigious expansion… Coal will undoubtedly be used up. What will industry do then?” after a demonstration of his solar thermal technology. This mirrors industry’s current dependence on oil and other non-renewable resources that have a negative impact on the environment – negative impacts that can be mitigated with solar panels and other forms of clean energy.

Albert Einstein even played a role in the advancement of solar energy. In 1905, he published his first paper on the photoelectric effect along with his paper on the theory of relativity, which he later won the Nobel Prize for in 1921.

In 1908, soon after Einstein published his paper, William J. Baily of the Carnegie Steel Company invented a solar collector with copper coils and an insulated box, which is roughly the present design of today’s solar panels.

In 1954, photovoltaic (PV) technology was born in the United States. Daryl Chapin, Calvin Fuller and Gerald Pearson developed the silicon photovoltaic cell at Bell Labs. It was the first solar energy cell which could convert enough of the sun’s energy into power to run everyday electrical equipment.

In the mid-1950s, Architect Frank Bridgers led the way in solar design by conceiving the world’s first commercial office building using solar water heating and passive design. This solar system is still operating, and the Bridgers-Paxton Building is now in the National Historic Register as the world’s first solar heated office building. Another important advancement in the 1950s for solar was its widespread use in powering satellites.

The world’s first laboratory dedicated to PV research and development, The Institute of Energy Conversion, was established at the University of Delaware in 1972. A year later they built “Solar One,” the world’s first house to directly convert sunlight into both heat and electricity for domestic use.

SunPower, which holds the record for the most efficient solar panels in the world, was co-founded by Dr. Richard Swanson, an electrical engineering professor at Stanford, in the 1970s. Dr. Swanson’s goal was to create a technology which would help us deal with the oil crisis and would be cost-effective. Since then, SunPower has led the industry through its creativity and record-breaking solar technology.

The next big advancement in solar power came in 1981 when Paul MacCready built the first solar-powered aircraft called the “Solar Challenger.” He flew it across the English Channel from France to England. The aircraft had over 16,000 solar cells on its wings and it produced 3,000 watts of power.

A year later, in 1982, Australian Hans Tholstrup drove the first solar-powered car, the “Quiet Achiever,” about 2,800 miles between Sydney and Perth in 20 days. Tholstrup is also the founder of the “World Solar Challenge” that takes places in Australia and is the world championship of solar car racing.

In 2015, Andre Borschberg broke the world record for the longest non-stop solo flight in history in a completely solar-powered plane called Solar Impulse 2. The record was broken during the plane’s round-the-world journey on its stretch from Nanjing, China to Kalaeloa, Hawaii after it flew non-stop for five days. The creators of the project are seeking to reach new heights by “writing the next page in aviation history with solar energy, and voyaging around the world without fuel or pollution.” The goal of their project is to inspire in a way that only cutting-edge solar technology can. They say “Solar Impulse’s  ambition is for the world of exploration and innovation to contribute to the cause of renewable energies, to demonstrate the importance of clean technologies for sustainable development; and to place dreams and emotions back at the heart of scientific adventure.”

The Future of Solar

In a recent report led by the MIT Energy Initiative, The Future of Solar Energy, MIT’s researchers state current crystalline silicon PV technology is capable of generating multi-terawatt-scale power by 2050. A terawatt is 1,000,000 megawatts, so that’s a lot of power. The report claims “solar electricity is one of the very few low-carbon energy technologies with the potential to grow to very large scale,” which means the future is very bright for solar technology!

Impressed by solar’s history and interested in leaving your own green legacy? Get a free quote with us today!