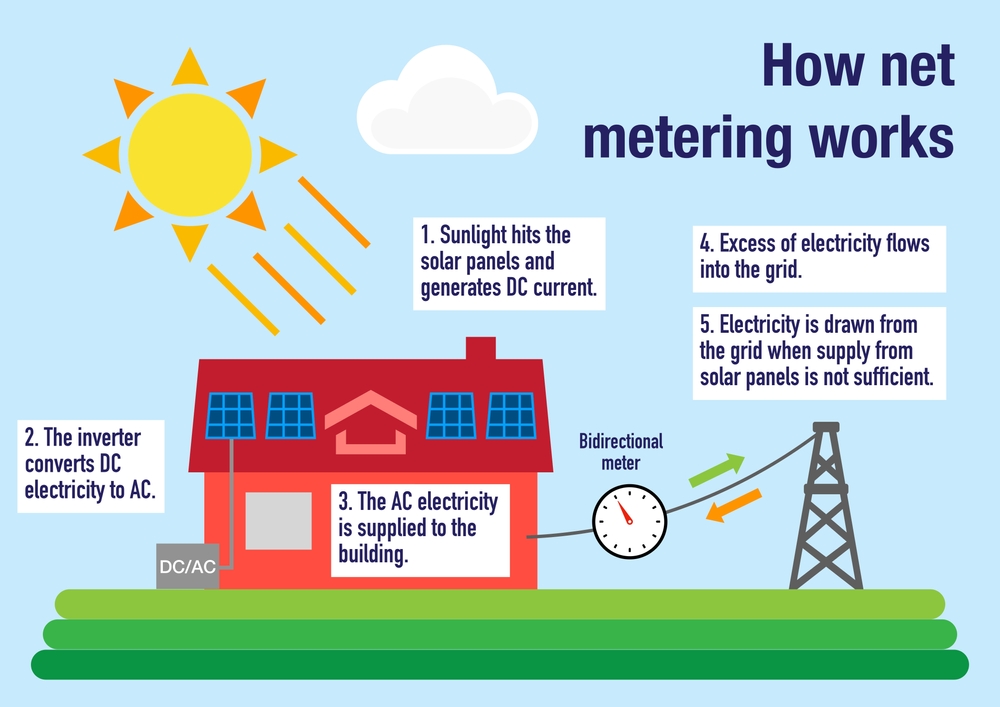 Net energy metering (NEM) is a billing system that credits a solar customer’s electric bill for surplus energy they send back to the grid. Just like the “net pay” amount on a pay stub shows how much you get paid after taxes are deducted, “net metering” was once a simple mathematical formula to reconcile how much residential solar customers still owed the utility company after selling back their extra energy.

It was first introduced as legislation in California in 1995 as Senate Bill 656, and has been available for all solar customers of three major utilities—Pacific Gas and Electric Co. (PG&E), San Diego Gas & Electric Co. (SDG&E), and Southern California Edison (SCE). The most significant result of NEM has been an accelerated transition to solar by California homeowners.

With NEM 1.0, customers could sell their excess solar energy back to the grid, but the utility companies—in agreement with the California Public Utilities Commission (CPUC)—limited the number of California homes that could go solar. Under NEM 1.0 policy, only 5% or more of the utility’s grid could run on solar. NEM 2.0 removed this cap, allowing all homes in California the opportunity to go solar.

While it sounds like a step forward, NEM 2.0 essentially allowed the state’s investor-owned utilities to add on various “service fees,” like interconnection charges, and tariffs per every kWh to fund state programs for low-income households and energy efficiency initiatives.

Utility companies are now pushing for a third iteration of the law—NEM 3.0—which would substantially reduce potential savings for new solar installations when the new law is in effect. This blog post discusses how California net energy metering works, the basic math involved, how it can translate into increased savings, and why you should consider installing a solar PV system at the earliest opportunity.

What is net energy metering?

If you’ve been looking into solar energy, you’ve probably heard the phrase “spin the meter backward.” Net metering does precisely that: pushing surplus power back to the grid for credit that lowers the amount of your energy bill. The original net metering policy, or NEM 1.0, was very simple: for every kilowatt-hour (kWh) of solar electricity you fed back into the grid, you got a bill credit of one kWh of utility-generated electricity.

Here’s how it works: You send surplus energy to the grid. The utility company sells it to other customers and credits your bill for the amount you sent. You pay only the ‘net’ amount after applying for your credit.

NEM 2.0 introduced a few changes to the original net energy metering policy. The key differences between NEM 2.0 vs NEM 1.0 are:

Homeowners switching to solar under NEM 2.0 still come out ahead, despite the slightly reduced solar credit rate, compared to NEM 1.0 rates (around 2 cents less per kWh). However, the changes proposed for NEM 3.0 are expected to impact solar savings significantly more than past modifications.

The changes proposed by the CPUC renames California net energy metering as ‘net billing’ and covers all customers of PG&E, SDG&E, and SCE. Let’s look at some key takeaways of the proposed NEM 3.0 and how it could impact your solar savings.

Rooftop solar installed today benefits from NEM 2.0 terms and will continue for 20 years, even if the proposed changes under NEM 3.0 are introduced. All new solar systems installed before NEM 3.0 goes into effect will operate under NEM 2.0 terms.

The following chart reflects the content of proposals made to the California Public Utilities Commission (CPUC) from Dec 2021 as a starting point for discussing NEM 3.0. It’s possible that the finalized utility rates, fees, and credits will differ from these projections, if and when the bill does pass into state law; however, it’s safe to say that any financial advantages under NEM 3.0 will not be as beneficial as those under NEM 2.0.

The CPUC released its proposed decision in December 2021 and is still in the process of finalizing that decision. Meanwhile, the Commission advises that customers who install solar under NEM 2.0 will not be subject to NEM 3.0 terms for the first 20 years of the system operations.

To do this, you’ll need to have submitted an initial interconnection application before NEM 3.0 is in effect. Keep in mind that it is one of the last steps in solar installation.

*NOTE: As of August 16, 2022,  The Inflation Reduction Act of 2022, restores the Federal Investment Tax Credit from 26% to 30% for home solar installations, home batteries, and other hybrid renewable systems and extends the credit until 2032. The new federal legislation may affect NEM 3.0 in CA, but the details remain unresolved.

So what does that mean? Start now. Our professionals can help you schedule your complete installation before the end of the year.

How long does it take to install a solar energy system?

As a general rule, we recommend planning for at least 16 weeks from start to finish.

Sixteen weeks? Yes. The process involves everyone from your HOA, city permitting inspectors, to your utility, and more. It could take even longer for someone who’s not an expert, so working with a trusted provider with established relationships is vital.

Want to learn more about going solar? We’ve got everything you need to know here.

What will happen if I wait to go solar?

You’ll likely pay more for solar energy over the next 20 years. Take a look at this example:

The same system installed under NEM 3.0

How can Baker Electric Home Energy help me?

We are committed to saving you from high energy costs—especially before they get even higher. Call us today and our qualified specialists will help you:

*All NEM 3.0 information is based on proposals published to date. Monthly fee calculations are based on an average SDGE customer with a 7-kW system. Fees are expected to start at $56/month and increase based on system size.

Contact Baker Electric Home Energy for more information on California Net Energy Metering to see how much you could save by going solar.